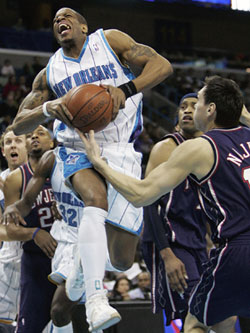 NEW ORLEANS –The Nets have gone from worrying about Devin Harris’ mental health to his physical well being.

By the end of the Nets’ 102-92 loss to the Hornets last night you almost forgot what happened with Harris the last time he played. For those who forgot: He sat on the bench with a towel over his head, benched along with Vince Carter by coach Lawrence Frank in a Boston slaughter.

How would Harris respond was the biggest question for the last few days. That turned into how is Harris?

The Nets’ leading scorer couldn’t finish this game, as he sat the final 15:57 because of a sore rib that he already has had x-rays on and will have more tests on today.

A CT Scan will be done to determine the severity of the injury, but it can’t be good since Harris described the pain as “sharp,” and said it was “hard to breathe.”

By the end of the game, the Nets’ fourth straight loss wasn’t as important as the possible loss of Harris. For how long? Who knows? He thought he was fine and going to be able to play and then his body forced him to bench himself.

Harris shot just 1-of-11 and had six points. Had he not been hurt there would have been some conspiracy theorists who questioned whether this is the first sign of Harris getting Frank back. There are probably some out there already.

Harris wasn’t hitting shots early, but he wasn’t playing badly when the Nets were building a nine-point lead in the first half. He was making plays for his teammates with four assists in the first half and two steals. But he couldn’t finish, just like the Nets.

This was a winnable game to open this four-game trip against a seemingly beaten Hornets team, playing without two starters and their backup center. Carter came out on fire, ready to put the benching behind him, and finished with 20 points.

But the Nets couldn’t sustain the effort and execution that helped them build that nine-point lead. Over a 16-minute, 15-second stretch between the second and third periods, the Hornets outscored the Nets 39-14 and Chris Paul accounted for 25 of New Orleans’ points.

Paul was terrific, easily the best player on the floor and he made his teammates’ better.

And he wasn’t throwing the ball to David West and Tyson Chandler, who sat out with Hilton Armstrong due to injuries. Paul played big minutes with seldom-used players Julian Wright, Sean Marks and Melvin Ely. There were some season-highs to go around.

For the Nets it was another case of wasting an opportunity. They showed fight late to get within five down the stretch, but that span over the second and third and a couple of lapses in the fourth made their late run futile.

“What happened in the third quarter is I think frustration took over,” Frank said. “We missed some easy shots, got some fouls called against us. At times we didn’t take great shots. All that added up and there was frustration.

“I think we showed great fight in terms of getting back in there. We said enough’s enough. We’re really beating ourselves. Unfortunately, Paul made some huge plays late.”

Your best players do that, willing their team to victory even in games it looks like they should lose. The Nets may need Carter to do that in San Antonio on Friday and beyond, depending on Harris’ health. 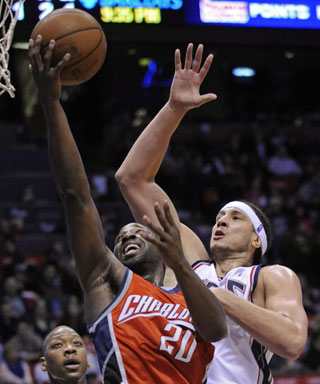 EAST RUTHERFORD, N.J. – We know one thing the Nets didn’t get for Christmas — an alarm clock.

The Nets waited until late in the third quarter before they realized they better start playing and found out once again that if they don’t play hard and smart from the beginning they can lose to anyone — even the East’s second-worst road team and the lowest-scoring team in the league.

This time it was the Charlotte Bobcats that came into the Izod Center and hand ed the Nets an embarrassing loss.

The final was 95-87, but it was embarrassing because the Nets let Larry Brown’s bunch shoot 50 percent from the field and build a 15-point lead before it kicked in that they were on their way to another double-digit home loss.

It was embarrassing because it’s a recurring theme. The Nets win tough, hard-fought games on the road. Show passion. Show fight. And then when they’re at home they barely show up.

Veteran forward Jarvis Hayes was asked if he thought teams were coming into the Meadowlands with extra confidence because of how poorly the Nets have played here.

“I would,” he said “if I see the energy we come out with at home, if I was the visiting team. That’s something we’ve got to change because more and more teams are going to come here with the same mindset if we don’t change our approach and pick up the energy level.”

The Nets have played 16 home games and have won five. Imagine if they had a decent home record, like 9-7 — they would have the fifth best record in the East.

Instead, they’re 14-15 and continue to be the only team with a winning road and losing home record. You have seen that in print before and probably will continue for a while since it will be a while before the Nets have a winning home record. They just have to hope they keep winning on the road.

“You get tired of losing altogether, whether it’s home or on the road,” Devin Harris said. “Things can be corrected. It’s not like it’s not in our control. That’s what the season is for – to get better.”

It used to be that the third quarter doomed the Nets in this building, but lately no quarter is their friend. They started slowly, showed a burst in the second period to go up seven and then allowed a 16-point swing and went into the break down nine.

Then they had a bad third until just under three minutes were left. By then they were down 15 to a team that had won two games on the road prior to this and had three double-digit victories all season.

This loss is on everyone, but it’s mostly the starters because the bench was the ones providing lifts all night.

Keyon Dooling injected the Nets with energy and life in both halves and Josh Boone, Bobby Simmons and Hayes did it in the fourth period.

The Nets got little from their starting forwards – seven points total for Yi Jianlian and Trenton Hassell – a solid game from Brook Lopez (14 points, seven rebounds) and not enough from the two stars: Vince Carter and Harris.

Carter started fast with 14 points in the first half, but finished with 19 and was 2-of-9 after halftime. Harris had 14 total on 4-for-15 shooting.

One positive for the Nets is they got on an airplane and went to Charlotte after the loss. This loss will stick with them and they do play better on the road.

Also, Carter and Harris seemed to take it badly. The two usually bounce back quickly and help the Nets get bad losses out of their system right away.

The Nets better hope they do because the next game after that is at home. Maybe they should put in for a wake-up call now. 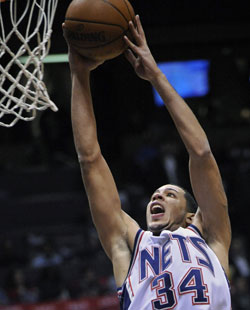 EAST RUTHERFORD, N.J. — The Nets should have won Wednesday night against the Knicks in what almost seemed like a road game that was played at the Izod Center.

Devin Harris delivered a perfect alley-oop pass to Yi Jianlian that he threw down to cheers from the fans. Then, a little later in the game, Al Harrington dunked a lob for the Knicks and the fans inside the Nets’ home arena went wild.

As usual, there were more Knicks’ fans here than Nets’ fans. But the Nets, who have been much better on the road, couldn’t muster up the effort, couldn’t produce the timely and impressive play that they have on the road this season.

Games like this hurt the Nets and their fan base. When you have the Knicks down 15 in your building and Harris playing a seemingly unstoppable game, you can’t stop defending and you definitely can’t get rattled by New York’s helter-skelter style.

But the Nets can, and they did. They got out of sync, had trouble when the Knicks threw some unconventional lineups at them, including some that featured no player under 6-foot-6.

Yet, there is a common theme with many of the Nets’ home losses. They struggle in the third, get down and can’t get back up. That’s what happened last night.

“Third quarter we kind of came out a little bit sluggish, but they shot the ball extremely well,” Harris said. “They got everything they wanted out there. We out-shot them, but we’re giving up straight-lines and open threes. It plays right into their game plan. It’s hard to stop them.”

Games like this make you forget what the Nets did in Philadelphia or here to Minnesota last week. That was a rare night when the Nets jumped on a team and never let up.

You have to applaud the Knicks for how they play and for never wearing down. It’s amazing. They go seven deep and never stop playing with energy, even after playing a down-to-the-wire game the night before in Chicago.

Harrington logged 42 minutes Tuesday and came back played 46 last night. Tired? The guy put up 39 points, took 16 foul shots, and grabbed 12 rebounds. The 16 foul shots were one fewer than the Nets, which was a big point of contention.

Inside the Nets’ locker room the only thing on the dry-erase board was the free throw differential. The Knicks took 35 and the Nets 17.

“This is a game where you throw the stat sheet out because we shot better from three and better from two, but the one stat I showed them was 35-17 free throw attempts in terms of their aggressiveness,” coach Lawrence Frank said. “There are three areas [that hurt us]: talking in transition, middle penetration and high pick-and-roll defense and then Harrington being the dominant player in the game and not having any answers.”

You shoot 53.7 percent from the field to 50.6 for the Knicks and are 11-of-27 on threes compared to 9-for-26 by New York. You hold rebounding machine David Lee to one board. You win on points in the paint and fastbreak points. You have to win the game, especially at home.

But the Nets haven’t figured out how to do that or defend well enough consistently. They would seem to go hand in hand.